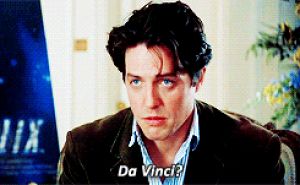 Born on April 15th 1452, hailing from Florence, and best known for his role in the Renaissance, today marks what would have been the 568th birthday of Leonardo da Vinci.

Upon hearing the name da Vinci, my mind is immediately drawn – rather unceremoniously – to that scene in Notting Hill, when a hapless Hugh interviews an entire film cast, feigning to work for the Horse and Hound, all in order to get some time alone with Julia (who wouldn’t, of course).

At one point, Hugh feebly enquires of one actress her favourite thing about acting and, in response to the smug quip of ‘working with Leonardo’, looks nonplussed, before proffering somewhat self-loathingly ‘da Vinci?’.

The result is a predictably withering – if a little disgruntled – look from the girl, followed by a scathing ‘di Caprio’. It is the final nail in the coffin of his short-lived and ultimately unconvincing journalistic career.

The uncertainty with which Hugh utters da Vinci’s name, however, got me thinking. Although, within the context of the film, this uncertainty is testimony to the fact that he is, of course, out of his depth in just about everything, such uncertainty seems entirely apt when one is spontaneously confronted with the sheer scope of da Vinci’s achievements, his life, his work, his legacy: one wonders where to start.

Universally acknowledged as a polymath and as a ‘universal man’, it seems there was very little with which da Vinci was unacquainted, very little that he did not know, or did not at least consider: he was a painter, a sculptor, a scientist, an inventor, an engineer, a mathematician, and an astronomer, to name a non-exhaustive few.

In light of this, it seems more prudent, more all-encompassing, and certainly more feasible, to instead commend the spirit in which each of his pursuits was undertaken.

The prolific nature of his innovation, the ambition of his mind, and his tendency to think outside the proverbial box all helped to define his profound influence upon, and role within, the Renaissance. The spirit of revival that is so intrinsic to the period is reflected in his own spirit of pushing limits, of cultivating and regenerating ideas to further develop our understanding of the way things are, and of the way things could be.

Although many of his ideas never actually came to fruition, and many of his inventions never physically realised, da Vinci was indisputably ahead of his time; his tireless activation of the potential of the individual mind is precisely what Immanuel Kant would, centuries later, come to define as the notion of enlightenment.

Writing in 1784, Kant identifies the motto of the Enlightenment as having ‘[the] courage to use your own reason’, of being able to make use of your own understanding ‘without direction from another’; accordingly, da Vinci is quoted as having written in his own notes that ‘one can have no smaller or greater mastery than mastery of oneself’, testimony to his forward-thinking reality.

Whilst not wanting to distract too much from the man of the hour, such a notion is pleasantly reassuring, and on some level pertinent to our current situation; there is nothing quite like being reminded of the potential of one’s own mind, particularly at a time when we are temporarily left with little else to amuse ourselves than our own peculiar musings.

To return to the case in point, the defining and iconic nature of da Vinci’s own inventive fervour was brought to my attention, quite conveniently the other day, when watching – and call me quaint – The Good Life. Determined to revive the lost art of self-sufficiency, a young Richard Briers embarks upon crafting his own electric generator, prompting neighbour Jerry to jocularly enquire whether or not Leonardo da Vinci is at home, as he descends into the basement of invention.

In true da Vincian (it is, after all, high time someone coined him an adjective) style, Briers remains unphased by the unencouraging and stalwartly unenlightened (every pun intended) remarks of an even younger looking Penelope Keith, who insists she’d rather rely on the national grid. Indeed, Briars remains jubilatory, and characteristically good-humoured, even in the face of what was probably always, almost inevitably going to be defeat – gleefully exclaiming ‘Wassail! Wassail!’ as he indulges in a home-brewed tipple.

I digress. The point is that da Vinci is here referred to figuratively, almost conceptually – he’s the original mad scientist, the name of anyone who attempts the unthinkable – but there is one part of his legacy that has remained conversely tangible and, in honour of World Art Day, it goes without saying that the significance of da Vinci’s own art must too be acknowledged.

Mona Lisa, The Last Supper, Salvator Mundi – again, to name a non-exhaustive few – not only remain amongst the most universally recognised and recognisable works, they have also – in true Renaissance style – inspired, and are responsible for, further works and feats within the arts more broadly: films, series, novels, Dan Brown’s career…

All in all, no small feat for a humble Florentine, particularly when placed within the context of their constituting but one string to an exceptionally well-strung bow.

Thus, in many ways, one can hardly blame Hugh for faltering slightly; da Vinci reigns supreme and unrivalled, ahead of the game, ahead of his time, and certainly ahead of di Caprio.

My trip, with Steve, Rob and Epicurus